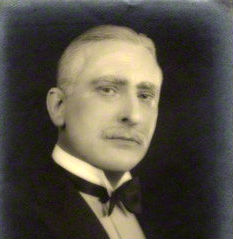 Frank Cellier was the only son of the conductor François Cellier, and was educated at Cranleigh. After leaving school, he spent three years in business.

In 1903, Cellier made his first stage appearance and thereafter made acting his career, also doing some stage manager work.  He toured not only in Britain, but in Germany and the West Indies, and did not make his debut in London until 1914, when under his own management he appeared in Cheer, Boys, Cheer. After this he toured in America and South Africa, and did not appear again in London until 1920. “By this time,” wrote The Times, “his solid merit was appreciated after his long and arduous apprenticeship.”

He pursued a career balancing new commercial plays – sometimes farce, often murder drama – and classical roles, appearing in a dozen Shakespeare roles of which he said his favourite part was Hamlet. Two of his most celebrated roles were in The Merchant of Venice and Twelfth Night, of which The Times said, “while he could wring the last drop of dramatic tension from the role of Shylock, he could also play Sir Toby Belch in such a way as to bring out the essence of the comedy without suggesting that the old reprobate had never known better days.”

In the West End, he directed and played in numerous plays in the 1920s and 1930s and  also made a few film appearances including Alfred Hitchcock’s The 39 Steps (1935). His final stage role was the father in Terence Rattigan’s The Winslow Boy in 1946, which he played to great praise in London and was due to take to America but was prevented by ill-health from doing so. He died in London in 1948.