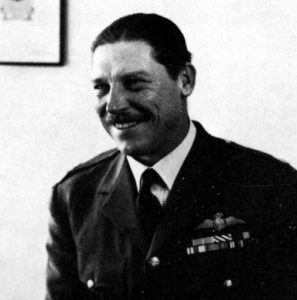 Air Vice-Marshal Edward Ward Seymour Jacklin was the first Commander of the Royal Rhodesian Air Force. His elder brothers Paul and Ivan, who was killed in World War Two, were a distinguished trio at Cranleigh. Their father was treasurer of the League of Nations in Geneva.

Edward came to the Junior School in 1928, had one term in the Senior School in 1931 and then returned for two terms in the sixth form in 1934-35. He was very intelligent and would have had a good chance of a history scholarship at an English university but the call of South Africa was too strong.

He first went to Rhodesia to work for the Imperial Tobacco Co., but he soon switched to the civil service and then to the air section of the Southern Rhodesia Territorial Force as one of its earliest trainee pilots. He was commissioned in 1939, and after service in Kenya he became a flight commander of. No. 237 (Rhodesia) Squadron of the RAF. He was graded as an A1 flying instructor, passed through the RAF Staff College at Gerrards Cross, and returned to Rhodesia as chief flying instructor in 1944: he was promoted to group captain at the age of 26.

In 1945 he was appointed to be the Southern Rhodesia air liaison officer in London, and the following year he relinquished his RAF commission to become acting director of civil aviation for Southern Rhodesia as a lieutenant-colonel. In 1949 he took command of the unit that became (five years later) the Royal Rhodesian Air Force; as AOC he had the rank of air commodore, and he was promoted to air vice-marshal in 1958. He was an additional ADC to the Queen.

He retireed from the air force in 1961, and became managing director of Hawker-Siddeley’s associate company in Johannesburg. He was only 51 when he died in July 1969 after a short illness.

He was also an outstanding rugby player whose career spanned the war, since he played for Rhodesia against the British Lions in 1938 and was vice-captain of the Rhodesian side that toured South Africa in 1946.

HP ‘Jake’ Jacob, an OC himself and in charge of rugby at Cranleigh in Jacklin’s time, said he was one of the best centres to have come out of the School, and that was high praise from a man who had himself played in the backs for England. “When he arrived at the Senior School at a rather mature age, there were not many of the arts of the game at which he did not already excel, be it running, swerving, jinking, passing, kicking or tackling. The best way of coaching him was to tell him that he was incapable of learning a particular feature. The smiling flash of his eyes was followed surely by perfect action. It was a joy to watch him at his best. ”