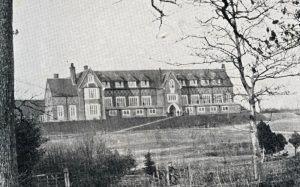 Easter was celebrated on April 1, 1866 with around half the boys – who by then numbered around 115 – remaining at the School.  There were only two official holidays – six weeks and three days in the summer and four weeks and three days in the winter – but work was suspended for five days at Easter and those boys who lived close enough to travel home were allowed to do so. The end of the break brought with it the last substantial group of new boys of the year, with seven arriving during Easter week and another eight over the course of April.

During this month, the first sports day was held on the rectory fields belonging to the Reverend John Sapte. The Surrey County School Register, published only a few months later, noted that “the details are unfortunately lost”. Cricket also started on the Common under the supervision of 22-year-old William Brayshaw, who joined the staff at Easter.

At a meeting of the School council on April 17 a decision was taken to hold a “prizeday towards the end of July and to ask the Archbishop of Canterbury to give away the prizes”. Sapte and Joseph Merriman were left to make the arrangements.