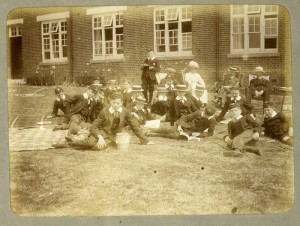 In August 1865 the construction of the Surrey County School continued apace, with builders, carpenters and other craftsmen working from dawn to dusk to try to meet the opening in September. The project was already well behind; the scheduled completion date had been at the end of July.

Joseph Merriman, who had been appointed in April as the School’s first Headmaster, moved into the buildings along with the Reverend Quick, who he had appointed his second master in June, midway through the month. With them was James Frood. Frood’s father was a land agent in Ireland, and Merriman, a family friend, had brought the 12-year-old James back with him in July. The first Cranleighan actually started a month before the School itself opened.

The buildings had not been fitted out, so the three of them slept on the floors. “It was remarkably hot, and this dried out the building and enabled us to sleep in the Headmaster’s house by the end of August,” Quick said.

Years later, Quick recalled his first sight of the School. “On approaching I saw a hole at the gate. On asking for the object of it, I was told this was for the water supply. It was thought that the surface water would collect in this hole and then might be pumped to the School. In wet weather the supply would be ample.

“When I went up to the building, I naturally enquired for the masters’ rooms, I was informed, however, that there were no masters rooms. There would be a common room found somewhere, and some special arrangements would be made for masters in the dormitories … curtains or something of that kind.”

The south and east sides of the Quad were built, as was the block to the west of what was to be Hall, which was used to house the builders who lived on site during the construction period. The grounds were strewn with rubble and, away from the buildings themselves, overgrown.

The governors, who had authorised advertisements in the national press, were concerned at the poor numbers registered. By the end of July only eight boys had been entered, and that had only risen to ten by the last week of August. Five more were added by the end of the month, although three were the Wintle brothers from Calcutta. The oldest of the first Cranleighans was William Emerson from Usk in Wales who was 15; the youngest was Henry Brumlidge of Worplesdon who was seven. The first boy registered was 11-year-old Walter Kitching whose name was entered on May 20, 1865, a month before anyone else.