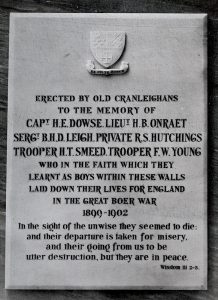 The Boer War (1899 – 1902) was the first major conflict in which Cranleighans fought. More than 100 Old Cranleighans took part and six died.  A fund was raised to erect a memorial to them and enough was raised to pay for a stained-glass window in Hall as well as a stone tablet in the Chapel.