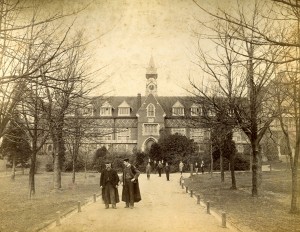 By the start of November the number of boys had risen to 26 – 21 boarders and five day boys – and registrations were slowly picking up, but in a school designed for 150 they rattled round and the three masters were more than able to cope. Nonetheless, the School sent notices to several local papers early in the month which claimed since the official opening “a large number of boys have entered the School”.