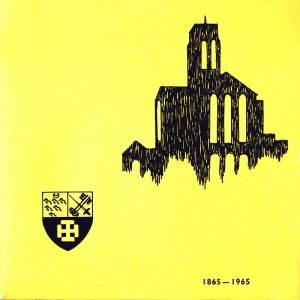 As part of the Centenary celebrations in 1965 a service of Thanksgiving was held at Guildford Cathedral on Saturday, June 19.  The senior and junior school choirs were joined by the Guildford Cathedral Choir and the Trumpeters of the Life Guards.  The Revd Willie Booth, at the time the chaplain, conducted the service, assisted by Laurie Tanner, a former chaplain, and David Loveday, the former Headmaster who was by then the Bishop of Dorchester. This was recorded and an LP issued later in the year. However, the official recording was not of a high quality as the microphones were incorrectly placed. An unofficial recording was also made by the School’s technical department which turned out to be a far superior recording than the official one. This survives in the archives.