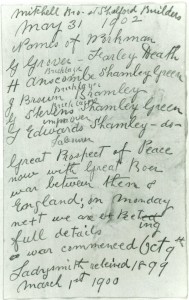 This note was found in the roofing of the Chapel during restoration work in the late 1990s.  It was written by workmen employed by the long-standing Shalford firm of Mitchell Brothers who were replacing the original plaster roof of the building with wood and lists those engaged in the project.  The five men – three from Shamley Green, and one each from Bramley and Farley Heath – would have walked to work each day in fair weather and foul. It could be a hazardous journey. In the winter of 1866 a workman on his way from Farley Heath to Ewhurst was found frozen to death on Smithwood Common after being caught in a storm.  The note, dated Saturday, May 31, 1902, refers to the end of the Boer War “with news expected Monday next”. The Treaty of Vereenigings, which formally ended the war, was actually signed on the same day the note and news reached Britain, as predicted, on the Monday.