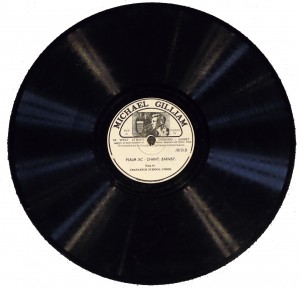 A 78 recording of the chapel choir which was made in 1950. The record (‘Psalm 90’ / ‘Hail, Gladdening Light’) was actually recorded in the Chapel by Michael Gilliam, who ran a Dorking-based company using a mobile recording van.   It is the oldest known recording of music at Cranleigh. This was originally thought to have been made in the 1930s, a fact stated in the 2016 history of the School, but John Gysin (2&3 South 1952) not only corrected the date but also provided a digitised version of the recording which is now in the School archives.