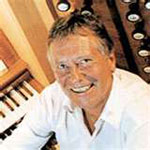 Director of music and organist at St Paul’s Cathedral who was one of the leading organists of his generation.

Christopher Dearnley, who was educated at Cranleigh between 1943 and 1948, was one of the leading organists of his generation and as organist and director of music at St Paul’s Cathedral he participated in some of the great state occasions of his time.

The third son of an Anglican churchman, Dearnley was one of a group of exceptional organists that came out of Cranleigh in the 1940s, encouraged by some outstanding teaching, primarily by Robin Wood, and given almost unlimited opportunity to play in Chapel by the absence of masters who would otherwise have done so.  He won an organ scholarship to Worcester College, Oxford where he also studied theology.

On leaving university, Dearnley did his national service at RAF Melksham. As the base was near Salisbury, he was invited to play for some services and this led to his becoming assistant organist at Salisbury Cathedral. He graduated to the full post in 1957, remaining there until 1968 when he was appointed to St Paul’s.   No conservative, he made clear from the off that he would push hitherto rigid boundaries, warning that “choirs must not be saved solely for the sake of preserving a tradition”.   True to his word, he mixed tradition with new composers and also introduced early music into the cathedral’s worship.

Given freedom by the Dean and Chapter of the cathedral, he edited anthems and services, sat on the editorial board of the New English Hymnal and even took the choristers into a recording studio and on their first overseas tour since the coronation.  He found time to make a number of recordings himself and also wrote two books – The Treasury of English Church Music (1965) and English Church Music 1650-1750 (1971). He was also chairman of the Friends of Cathedral Music for 19 years from 1971, overseeing a time of considerable financial growth for the organisation.

He drove through the rebuilding and enlargement of the cathedral organ, including a new division over the great west doors.  These more than once startling royalty, so much so that they are now banned when Prince Philip is underneath.

In 1977 he wrote an anthem for the service to mark Queen Elizabeth II’s Silver Jubilee, playing it himself, and in 1981 he masterminded the music for the wedding of the Prince and Princess of Wales; a year later he undertook the same role for the Falklands memorial service.

In 1990 Dearnley and his wife emigrated to Australia to enable him to pursue a quieter life of lecturing and teaching. Almost inevitably, he was in considerable demand and held a series of temporary musical positions at cathedrals in Hobart, Sydney, Melbourne, Brisbane and Perth.  At the time of his death in 2001 he was living in a one-room wooden hut outside Sydney, thoroughly enjoying a simple life.