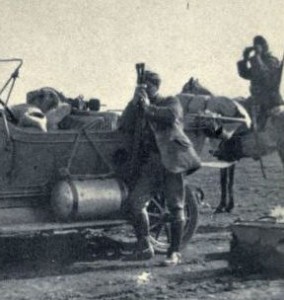 He was the first journalist to report the relief of Ladysmith, dodging his way through the enemy to file his copy and deliver what was a global scoop.

Lionel James went to India after leaving Cranleigh where he became an indigo planter. While there he discovered a hidden talent for writing and became a Reuters correspondent. When covering a battle in the Makaland Pass he became involved in the fighting, so much so that he was mentioned in despatches, and this convinced the agency to send him to other areas of conflict.

In 1899 he joined The Times and covered a wide variety of wars for them, making an immediate impression during the Boer War. He was the first journalist to report the relief of Ladysmith, dodging his way through the enemy to file his copy and deliver what was a global scoop. “His views on military and political affairs in South Africa were to become increasingly important as the war proceeded,” wrote Donal Lowry in The South African War Reappraised.” “On his return to South Africa in 1901, James coordinated the reports of stringers on the war and reported on any other matters which interested the public at home. It was partly on the basis of his reports that the Times took its unyielding stance on the concentration camps.”

He was an innovator, using any means to file his reports. During the siege of Ladysmith he used carrier pigeons to get his stories out, but a crate of pigeons sent to James was intercepted by the Boers who ate them, and then sent James a message thanking him for the “basket of nice fat pigeons”. In 1904 he reported the Russia-Japan war from wireless he installed on a ship, the first man to use such technology.

During World War One he commanded King Edward’s Horse, serving with distinction in France and Italy where he won the DSO. After the war he devoted his time to writing books and for a time managed a racing stable. His obituary in The Times said what he wrote on war “was backed by experience and hard study of the subject”.