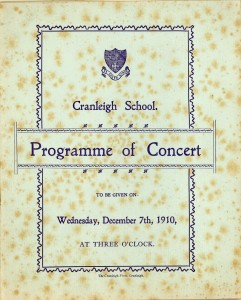 From the earliest days there were concerts staged at the end of the Summer and Michaelmas terms. For many years, the boys involvement was peripheral with most performers either teachers or brought in from outside. It was not until the 1920s, as the quality of music improved, that boys took more central roles.  These concerts took place in Hall until the opening of the expanded gym in 1897, and then from 1930 they moved to the Speech Hall.   Until electricity arrived in the late 1920s these concerts were held in the afternoon to make the most of natural light.