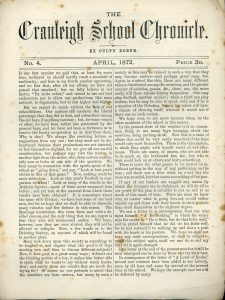 The first school magazine was the Surrey County Register which appeared annually between 1866 and 1910, while the longest-lasting is what has become the Cranleighan, which was first published in 1878, with as many as five issues a year.

The predecessor of that came in 1871 when the boys, aided by masters, started the Cranleigh School Chronicle which was initially produced from within the school with the aim of “recording the results of the physical and intellectual growth of our school-fellows”.

Costing 3d (1p) per issue, this relied on subscriptions, which were slow to build, although that was not helped by the increasingly irregular dates on which it appeared.  The last issue was that of April 1878.  A full bound set of the Cranleigh School Chronicle was presented to the School by Isaac Hardy in 1880.