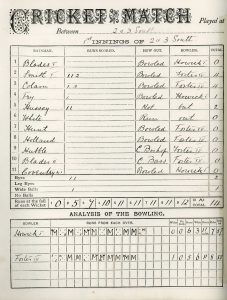 A page from a cricket scorebook for 1887 showing the rather wretched innings of 14 by 2&3 South against 1&4 South. House matches at this time were held on several afternoons each week and featured players not in the 1st XI, with up to three matches taking place concurrently on the Common.  It is worth noting that at the time five-ball overs were used.

1&4 South were the overall winners, winning 13 of the 17 games they played; 2&3 only played seven times, but did manage three wins. But these matches were far from universally popular. The coaching was poor, and at times non-existent, and there were regular moans in publications and masters’ minutes that the games were often rendered pointless by the apathy of those taking part.