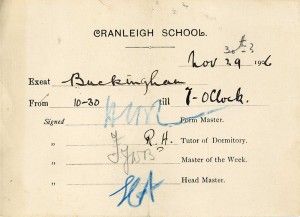 Until the 1960s, boys had little contact with their parents in term time. If their parents lived close enough, they could occasionally visit and if a boy wanted to see them and be taken for tea in the Village, he had to put in a request for an exeat, which were limited to three a term, always on Wednesdays or Saturdays. Even then the request form needed signatures of four masters and necessitated a series of probing interviews.

When he became headmaster in 1931, David Loveday, in so many other ways far more liberal than his predecessor, put in stricter limits on the number of exeats. He explained to one parent that “too frequent visits have an unsettling effect … and are unfair on those whose parents live a long way away or cannot afford the continual luxury of a visit”.