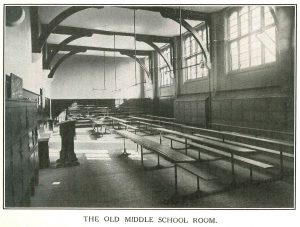 The Lent Term of 1867 continued with little to break the monotony. Sport was limited to informal games of football on what is now the East Lawn and some exercise was available in the gymnasium (now the Chapel corridor) which had basic equipment thanks to a donation from the Headmaster.

The School would also have been cold and dark in the depths of what was a grim winter. Dormitory windows were left open all the time – the belief being fresh air helped prevent illness – and the only light came from flickering oil lamps which left a lingering smell which one boy said he could clearly remember more than six decades later.

On Shrove Tuesday the school went down to the national school in the Village and gave a “Penny Reading” to raise funds for the parish. The Surrey County School Register noted that “the readings were interspersed with glees and madrigals sung by the school choir”.

A long article in the West Sussex Agricultural Express on February 23 outlined the history of the School but was clearly aimed at encouraging more donations to allow the second phase of building (the north and west sides of the Quad) to start. It said the school council “made an earnest appeal to those who have already helped in this work not to leave it hampered with a debt and with only half its intended usefulness”.

Without the extra building the school could not expand to the intended capacity of 300 and was limited to around half that number. As it was there were too many boys already and extra accommodation in houses in Horseshoe Lane had to be utilised to cope with them all.

The article also highlighted the desperate need for a chapel. “There is no convenience for meeting so many boys in the Cranley parish church and in the meantime service is held in one of the classrooms .. the room is plainly fitted up and on Sundays there is a morning and evening service.” The classroom referred to is now the Reading Room.