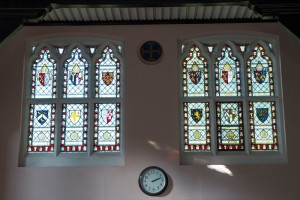 The stained glass Founders Windows in Hall were donated by Sir George Cubitt in 1869 and featured the arms of almost all the men involved in the establishment of the School. In 1964 some of the windows were moved to different parts of Hall to allow more natural light into the gloomier corners of the room. Four of the widows were transferred to the Chapel corridor.