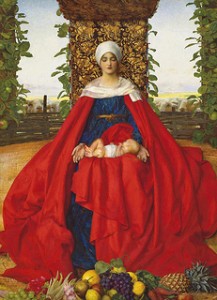 Popular Edwardian artist, sometimes referred to as ‘The Last of the Pre-Raphaelites

“His paintings are entirely self-contained and explain themselves without the word of an interpreter”, PG Konody, 1907

Frank Cadogan Cowper was born in Wicken, Northamptonshire in 1877, son of yachting author Frank Cowper. He was raised as a Plymouth Brethren and educated at Cranleigh, before going on to study art, first at St John’s Wood Art School in 1896 and then at the Royal Academy Schools from 1897-1902.

He first exhibited at the Royal Academy in 1899 and two years later had his first critical success there with An Aristocrat answering the Summons to Execution, Paris 1791. In 1902 Cadogan Cowper spent six months in the studio of the successful American artist Edwin Austin Abbey in Fairford, Gloucestershire, before travelling to Italy to continue his studies. He excelled as both an oil painter and water colourist, favouring highly detailed representations of literary, biblical and historical scenes and events and was heavily influenced by the earlier works of Millais and Rossetti.

In 1904 Cowper became an Associate of the Royal Watercolour Society and three years’ later an Associate of the Royal Academy. According to the Pall Mall Magazine he ‘awoke to find himself famous’ on May 4th 1907, having selected an unusual painting to exhibit at the RA, which became ‘…the picture of the year.’ Entitled How the Devil, disguised as a vagrant Troubador, having been entertained by some charitable nuns, sang to them a song of love’ (and soon shorted to ‘The Devil and the Nuns’) it was much admired by artists, critics and every section of the public and established him as a popular and highly sought after painter. In 1911 he became a full member of the RWS and also found success as an illustrator of books and a society portrait painter.

His attention to detail secured him a commission for the mural scheme in the Houses of Parliament in 1910. Despite his notoriety as a painter of slightly tongue-in-cheek religious scenes, which earned him a blasphemous reputation in some quarters and certainly caused him some criticism from the Catholic church, he was also commissioned to paint the altarpiece for Godalming Church (sold to a US buyer in 1964).

By the 1920s the taste for his realistically painted scenes was declining and by the time he was elected a full member of the RA, in 1934, he was reliant on his wealthy patrons, such as Evelyn Waugh. He continued to exhibit up to his death in 1958 at the age of 81. The renewed interest in the pre-Raphaelite style of painting, and the clear skill of his work, have caused his reputation to return in recent years. His works are displayed in the Tate and one of Cowper’s last paintings to be auctioned fetched £469,000, more than three times the guide price.