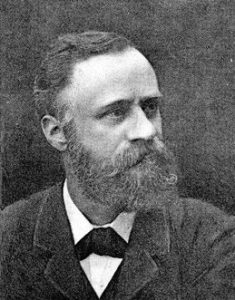 Francis (Frank) Verity was the son of the theatre architect Thomas Verity. After leaving Cranleigh he studied at the South Kensington Schools before being articled to his father in 1883. While there he studied at University College under Professor Hayter Lewis and at the Architectural Association. In 1887 he entered the Royal Academy Schools and undertook a tour of Italy, Germany and France and on his return in 1889 he passed the qualifying exam and was admitted ARIBA on 3 June 1889.

With his father’s health failing – he died in 1891 – Verity immediately become involved in his work and he inherited his father’s post of Surveyor of Theatres to the Lord Chamberlain. It seems very likely he was involved in the design of the current pavilion at Lord’s which was ostensibly the work of Thomas and which was built in eight months in the winter of 1889-1890.

Francis was the architect of many distinguished theatres and London office and apartment blocks, all of which strongly reflected his Beaux-Arts schooling, their style strongly influencing the work of his pupils, Albert Richardson and Charles Lovett Gill. On the accession of Edward VII in 1901 he was commissioned to redecorate the state apartments at Buckingham Palace, and in the same year became architect to the Lord Chamberlin’s Department.

In 1930 he took his son-in-law Samuel Beverley into partnership (the latter had been working for Verity since 1922) and they became European advisory architects to the Paramount Cinematograph Company and to the Union Cinema Company, the former appointment bringing commissions for large Paramount cinemas in Tottenham Court Road, London, Birmingham, Manchester, Newcastle-upon-Tyne, Glasgow and Paris.