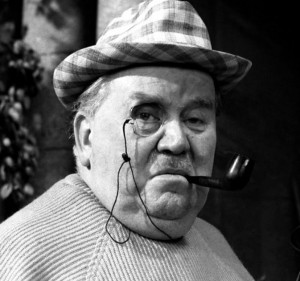 Well-known comic character actor who worked regularly on stage and in film and at one time had a prime-time BBC entertainment show.

Fred Emney (East 1915) was the son of a well-known music hall artist and made his first appearance on the stage when he was only 15.  By then he had left Cranleigh twice.  He is probably the only boy whose father’s occupation is listed as ‘comedian’ and certainly the only one Christened ‘Round’, a fitting name given his girth in later life. He came to Cranleigh in 1908 but while performing in the north someone told his father that Cliftonville was a better school, so without notice he removed his son from Cranleigh and packed him off there.  It was not a successful move,  and a relieved Emney junior eventually returned, although by his own admission he skipped most classes to practise on the piano. When he left, the Headmaster noted: “He wished to devote nearly all his time to music with a view to the stage.”

“I wasn’t very good at work,” he recalled years later. “Not that I was much duller than any of the other boys in my class , but simply because I was already certain I was going on the stage, and so it seemed silly to me to work at anything that wasn’t obviously going to be useful to me in the theatre.  Far better to sneak off and practise the piano, which I did at every opportunity.”

He left for a second time in 1915, not telling anyone he was off but determined to make a career on the stage. In his second show in 1916 he portrayed a monocle-wearing ‘silly ass’, a role that he was to play with great success for the remainder of his career.   Before he was 20 he was earning 20 guineas a week, a considerable salary and more than his old Headmaster.  Despite that, he headed to America where the film industry was taking off.  By chance, he met Charlie Chaplin, an old friend of his father, in Los Angeles and was told to turn up at the studio the next day for an audition.  He did, but was promptly beaten up and sent packing by a security guard who refused to believe the 20-stone Englishman.  Fifty years later he bumped into Chaplin in a London restaurant and reminded him of the appointment. “Good heavens,” Chaplin replied. “You’re late.”

After 11 years in vaudeville in the USA, Emney returned to Britain and became an established figure on the stage and cinema.  In all, he featured in more than 30 films, usually playing a pompous, posh, cigar-smoking aristocrat.  During the 1950s, he had his own prime-time BBC television show, Emney Enterprises, which featured sketches and piano pieces often composed by him. He also had a short spell as straight man to puppets Pinky and Perky. In later years he was in demand for cameos in films such as The Italian Job, Those Magnificent Men In Their Flying Machines and Oliver.

He never forgot his links to Cranleigh.  On one occasion a group of players from the OC Rugby Club decided to head to the West End one Saturday night to watch Emney’s one-man show.  “They took a box and, at request time, loudly demanded the School song. Emney, much moved, duly obliged, accompanied fortissimo from the box. Picture the expressions on the remainder of the audience as Cranleines Gaudeamus echoed round the theatre, a strange song in a strange tongue, bellowed by a fat man in his underpants, tears streaming down his face …”

Emney was also a regular visitor to the School where he often left a note in the Tuck Shop, along with some money, for the “fattest boy in the place” to treat himself and his friends.

When he died on Christmas Day in 1980, The Times referred to “his vastness of size and girth”, adding: “There was no thin man inside him struggling to escape from his gargantuan frame, for he was obviously delighted with what he was. He was a highly original exponent of an old comic tradition.”