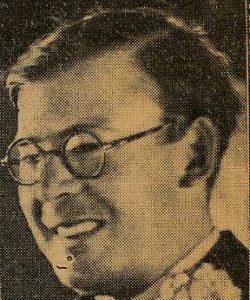 Bon viveur and darling of the tabloids

Although his name means nothing these days, for a time shortly before World War Two Gordon Roll regularly featured on the front pages of the national tabloids and his exploits were reported on daily.  Along with his more circumspect brothers, Roll inherited almost half a million pounds, a vast sum at the time, and announced that he intended to make an even bigger fortune by gambling on horses.

The press took notice and Roll’s progress was closely followed.  Perhaps inevitably, the occasional good day – he once won £20,000 in an afternoon at Windsor – were overshadowed by the many bad ones.  His profligacy was not helped by a decision to buy a string of (rather slow) racehorses. By August 1939 the money was disappearing alarmingly quickly (it was estimated he was losing £10,000 a month) and so Roll sold his horses and told the press he was off to Hollywood, boasting: “I’m going to be the next Clark Gable.”

The war intervened and he rushed home to enlist, although the press interest continued and it was reported that “his chauffeur arrives at his barracks each evening and passed chilled champagne to him through the fence”. He was captured by the Germans in 1940 and spent the war as a POW, but was still in the spotlight. In 1941 newspapers as far a field as Australia reported that in a letter to a friend, Roll had said he had spent his captivity “devising a fool-proof scheme for making £120,000-a-year from gambling”. He continued to make headlines post-war as he squandered what remained of his fortune, inevitably on horses. With his money gone, the remainder of his life was far less eventful and far more private.  “I know I’ve been a mug,’ he said, ‘but it was worth it for the fun.”