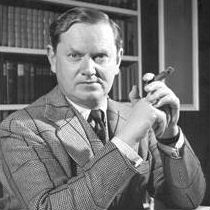 The man with the million-dollar palate

Harry Waugh was a Cranleigh rarity, someone who turned his drinking into a career.  On leaving school early when his widowed mother ran out of money, he found a job at a London wine merchants and after serving in the war with the Welsh Guards he joined Harvey’s of Bristol where he quickly rose to become the chief table wine buyer and seller.

By the 1950’s he had become an internationally respected taster, Decanter magazine noting “his tasting was unforced, instinctive and unerring”.  Although he retired from Harvey’s in 1966 he continued travelling, tasting and writing; his first book, Bacchus on the Wing, being published in 1966.

The French government decorated him with the Merite Agricole in 1984 and then as a Chevalier de l’Ordre du Merite National in 1989, the same year in which he was made an Honorary Master of Wine. He was appointed MBE in 1994, and was referred to in an American newspaper as “the man with the million-dollar palate”.

When he died in 2001 aged 97, wine critic Jancis Robinson wrote: “In the middle years of this century he trained almost everyone who was anyone in wine at the time.  No one who ever met him could fail to be impressed by his knowledge and impeccable manners.”