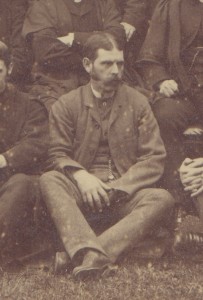 In an era when masters played for the School, he scored 3836 runs and took 736 wickets for Cranleigh; he also excelled for a variety of local club sides.

Henry Casswell came to Cranleigh in its first year and Joseph Merriman recommended to the governing body that he be retained as an assistant master when the time came for him to leave in 1870. He remained at the School until 1894.

While not academically outstanding he was described by another master, Dick Harris, as “quite the boys’ ideal of what a sportsman should be, and there was not a boy who did not look up to him as the very best man to try to emulate”.

He was an excellent cricketer and more than able at football, fives and tennis, played the coronet in the orchestra and sang in the choir. All this was more remarkable as he had lost the bottom of his left arm in an accident when he was a teenager.

In an era when masters played for the School, he scored 3836 runs and took 736 wickets for Cranleigh; he also excelled for a variety of local club sides. He raised funds to build the original thatched Village cricket pavilion, and in 1881 first floated the idea of an Old Cranleighan Club. A year later he suggested holding an annual OC Dinner and acted as its chairman for the next 17 years. Joseph Merriman officiated at his wedding in 1892 and after leaving Cranleigh he lived in Rusper, dying aged 68 in 1918.