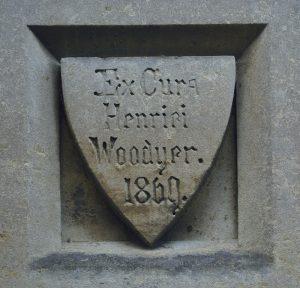 Henry Woodyer (1816 – 1896) was a highly respected Victorian architect who was responsible for the design of most of the early buildings including the main school around the Quad, the Chapel and Hall.  Unlike others, he left no known foundation stones, preferring more subtle commemorations such as engraved stones, often subtly sited. High on the outside north wall of Hall is a stone marking Woodyer’s work on that building; although it was completed in 1868, the date on the stone is a year later.