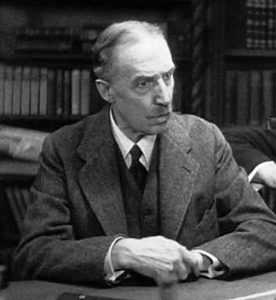 An English stage and screen actor best known for his role as Dr. John Seward in the Broadway and film versions of Dracula.

Herbert Bunston was born in Dorset and briefly  attended Cranleigh School. He appeared regularly on the British stage between 1896 and 1922, after which he emigrated to the United States.

He first appeared on the Broadway stage in Arthur Wing Pinero’s The Enchanted Cottage in 1923 alongside Katharine Cornell. Other roles included That Awful Mrs. Eaton! and Simon Called Peter in 1925. None of these plays ran for more than three months but he won strong critical notice for his next role in 1925’s Young Woodley, which ran for 260 performances. On 5 October 1927, he debuted alongside Bela Lugosi and Edward Van Sloan in Dracula. Early in his career Bunston had actually met Bram Stoker while appearing on the London stage. Following his success in these last two plays, he signed a contract with Metro-Goldwyn-Mayer. Following a number of roles of greater and lesser significance, Bunston was cast to re-create his Broadway role in the film adaptation of Dracula (1931).

He was in regular work thereafter starring in File 113 (1932), the drama Vanity Fair (1932) with Myrna Loy and the comedy adaptation Dinner at Eight (1933) with John Barrymore. He also appeared in Dr. Monica (1934). Nearing the end of his career, he tackled roles in Long Lost Father (1934), The Little Minister (1934) and the drama The Moonstone (1934) with David Manners. His final role was in Clive of India (1935) which was released shortly after his death in the same year.

Although all official records list Bunston’s date of birth as 1874, research has shown he was actually born in 1865, making him almost 70 at the time of his death.