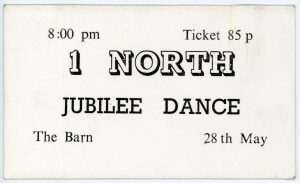 Before the arrival of girls, dances were held in the Speech Hall and girls brought in from neighbouring schools.  Once girls were a part of Cranleigh life from the 1970s, internal dances for the Sixth form became a regular feature and each house took it in turns to host them.  Limited amounts of alcohol were provided but the evenings provided a challenge for staff as they tried to intercept the often significant amounts of smuggled drink as well as ensuring the attendees remained in the venue and avoided sneaking out to quieter areas.  The dances were phased out in the 1980s.