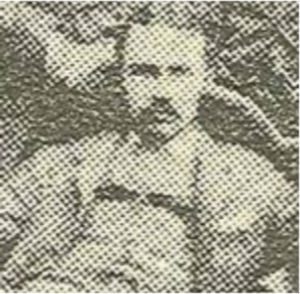 Heron was the oldest of three brothers who entered the School in January 1866, and although he was only five days shy of his 14th birthday, he was one of the older boys at the time.

In June 1866 he took part in the School’s first competitive match –  a game of cricket against a visiting XI – and later also played football for the XI.  After leaving, he continued playing football and in 1873 he won the first of five England caps when he played against Scotland at The Oval.  England won what was only the second-ever international match 4-2.

From 1874 he represented the Wanderers, at the time one of the leading amateur sides, and was in their side when they won the FA Cup in 1876, 1877 and 1878. In 1876 he captained England to defeat against Scotland, the side containing Heron’s brother Francis, who had joined the School with him in 1866, and a third Old Cranleighan, William Buchanan. That season the Herons both featured in the Wanderers side which won the FA Cup; it would be another 120 years before a pair of brothers again played together in an FA Cup-winning side and for England in the same season, when Gary and Phil Neville did so in 1996.

To continue the Cranleigh presence, the 1876 final was referred by Buchanan.  Heron, who was also on the Football Association committee between 1873 and 1876, retired from the game in 1878 to concentrate on business as a wine merchant in Bournemouth. He died in 1914.