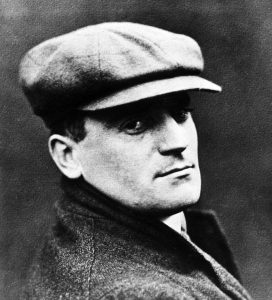 An English artist, collector, connoisseur, dealer in Old Masters, museum curator, writer on art, and a supporter and promoter of modern British and French painters who in 1914 made what art critics called the 'discovery of the century'

Hugh Blaker was at Cranleigh and on leaving put his interest in and knowledge of art to good use by working as an art dealer. He was also curator of the Holburne Museum in Bath from 1905 to 1913 while at the same time still dealing in art and assembling an important collection which he kept as his Isleworth home. After he died in 1936 more than 600 works were auctioned off.

In 1914 he made what was at the time labelled as “the discovery of the century”. Blaker, like many experts, had always believed that there was an earlier version of Mona Lisa painted by Leonardo da Vinci, which formed the draft model or cartoon for the subsequent Louvre version, completed years later. In 1913 he heard rumours that such a painting was in the home of an aristocrat in Somerset. The painting was known to be by da Vinci and had been brought to England in the 1770s and Blaker was able to purchase it from a Bath art dealer where it had ended up and where its real worth was not recognised.

The painting was cleaned and reframed and Blaker wrote to his sister: “The Mona Lisa is perfectly beautiful. I may be very sanguine, but I think there is big money in it. I am sure it was done in Leonardo’s studio before the Louvre picture was finished as the background is entirely different. One would argue that … the figure was probably done first and the background left until the end. Hence the disparity between the two backgrounds. That in mine is not so finely wrought and quite different in composition. Therefore it is not a copy as we understand the term.”

At the outbreak of World War One, Blaker sent the painting to the USA for safe keeping where it was displayed at the Museum of Fine Arts, in Boston until early 1918. It was widely known as the Isleworth Mona Lisa. According to Encyclopedia Americana[8] and The New York Times,[9] The Isleworth Mona Lisa has been attributed to Leonardo, and is thought to be the unfinished portrait from which Raphael made his famous sketch (which is in the Louvre museum), and is in no sense a copy of the Louvre Mona Lisa.

From 1924, Blaker became guardian to the 16-year-old William Hartnell. Blaker had found Hartnell flyweight boxing near King’s Cross, London. Hartnell was an illegitimate child from the London slums. Blaker gave him a home and sent him to the Italia Conti Academy of the Theatre Arts. While Hartnell made numerous stage and television appearances and acted in over 75 British films, he is best remembered as BBC Television’s first Doctor Who (1963–1966). When Hartnell married, he and his wife continued to live in one of Blaker’s adjacent properties at Isleworth; their first child, Heather, was born there in 1929.

In his later years, Blaker regretted that he had not been blessed with a single-mindedness of vision that could have enabled him to succeed in his calling as artist. On 25 February 1932, he recorded in his journal: “The cause of my failure to “make good” in any single branch of knowledge is that I have too many interests. Had I been isolated in my youth at a time when there was demand for artistic expression, I should have been an artist of repute. I was dumped into a generation which did not care a damn for art – apart from popular art. I just happened. I was an Old Master, born centuries late. No kid ever had greater equipment. No kid ever faced greater frustration. Centuries ago I would have been apprenticed to a painter – as a boy well fitted to make good in a prosperous trade. Instead, at that period of my development, I was the veritable curse of damn-fool schoolmasters at my public school, Cranleigh. I was a wondrous fair kid, strong, and good at games. I got something out of them. In the gym I builded (sic) up a body as strong and fair as that of any sweet boy of the 80s.”