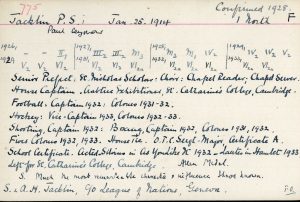 Until the late 1950s all boys had an index card on which their achievements and misdemeanours were recorded, often in embarrassingly graphic details. The most withering comments were often made by the headmasters when the boy left, a pithy assessment of what had been achieved and what the future held.

The red ink and spidery handwriting of David Loveday could be particularly acerbic. But for those who shone, the card was a catalogue of success. This one is for Paul Jacklin, one of Loveday’s first senior prefects in 1933 and a boy he held in the highest esteem. The note on the back of the card states:

“He is much the most remarkable character and influence I have known. He knew what I wanted by intuition. He transformed the school from a military machine to a family with a soul. His extraordinary popularity was won simply by force of character.”

Jacklin captained the School at a variety of sports and, according to Strachan, in his final year had an affair with Michael Redgrave at the same time he was in a relationship with a lady who ran a cake shop in the Village.