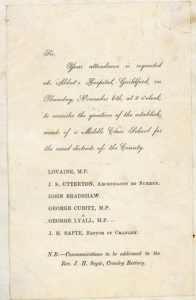 In the autumn of 1862, the Reverend John Henry Sapte, rector of Cranleigh, and George Cubitt, later Lord Ashcombe, a wealthy local landowner and MP for West Surrey, were invited to breakfast with John Ullerton, the archdeacon of Surrey who was visiting Guildford. After the meal, Cubitt said one of the urgent requirements of the county was a public school for the education of the middle classes and said he would consider taking this on if Sapte agreed to help.

Sapte “after mature deliberation came to the conclusion that it was his duty to co-operate in the matter”. Cubitt and Sapte used their contacts to attract some well-connected associates and called a formal meeting on the afternoon of 6th November 1862 at Abbot’s Hospital in Guildford. Also in attendance were 14 others, including the new Duke of Northumberland and George Lyall (both MPs when first approached), as well as Ullerton. The proposal received an enthusiastic go ahead and the scale of the initial donations persuaded them to adopt more ambitious plans.