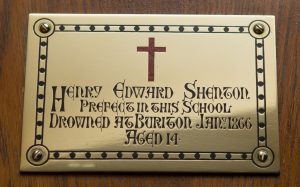 The School returned from the holidays on January 23 with the Surrey Advertiser recording “the number of boys entered being 160, a few more than were there before breaking up”. With the capacity set at 150 and with no more building scheduled until the remaining debt of £1400 outstanding from the initial construction was cleared, the surplus were catered for by renting a house in Horseshoe Lane to accommodate the overflow.

Before the term had started there was a tragic incident when 14-year-old Henry Shelton, who had been at the School since its first week in 1865, and his brother Robert, 12, who was due to join the School the following week, drowned at their home in Buriton, Hampshire on January 3. The brothers had gone out hunting with a gun and fallen through ice into a pond on their family farm.

During the holidays the classrooms and dormitories had “undergone a thorough cleaning and purification and … no traces of the scarletina which caused trouble at the end of 1866 remained”.

To help cope with the increase in pupil numbers a fifth master, Paul Roberts from Queen’s College, Cambridge, joined.