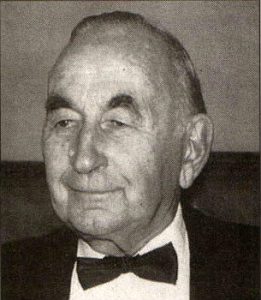 After leaving Cranleigh, John Collard studied history at Oxford from where he joined the Treasury as a solicitor before joining the Chesire regiment in 1940. He was then seconded to MI5 from where he switched to MI11, a section of the General Staff with overall responsibility for the counter-intelligence measures involved in protecting the British Army’s Order of Battle and secret weapons.. After the war he rejoined MI5 and undertook protective security duties until he was posted to Singapore in 1947.

On his return to England he was recruited by Sir Percy Sillitoe, who had recently retired as MI5’s director-general, to combat the trade in illicit diamonds which had grown up in West Africa and for the next three years he was based in Johannesburg where he worked for the International Diamond Security Organisation.

The task was completed surprisingly quickly, after little more than three years, and the Oppenheimer family of De Beers announced they were winding up the International Diamond Security Organization, which Sillitoe had set up for them. But Sillitoe was unhappy with the decision; he encouraged Collard to write a sober account of the operation, then passed the manuscript, after it had been considerably censored by De Beers, to the Sunday Times.

The newspaper gave the manuscript to its staff man Ian Fleming, whose interest in the subject had been whetted by his recent James Bond novel Diamonds are Forever, and he duly tracked down Collard in Zululand. For 10 days in Tangier, Collard helped Fleming work on a series of articles for the newspaper, which were later republished in 1957 as a book under Fleming’s name as The Diamond Smugglers. At the end of book, Fleming recorded Collard as saying, “I’m sick of crooks and spying on them. All I want is a nice quiet job as a country lawyer … or some other job where I can clear all this muck out of my mind.”

Fleming penned a vivid portrait of Collard with his inconspicuous good looks: “A man of about 40, dressed in the typical uniform of the Englishman abroad – Lovat tweed coat, grey flannel trousers, a dark blue rope-knit sweater, nondescript tie and, rather surprisingly, a fine white silk shirt of which he later confessed he owned 24. He had dark hair flecked with grey, and shrewd, humorous, slate-coloured eyes that turned up slightly at the corners. His smile was warm and his voice quiet with a hint of hesitation. He always spoke with a diffident authority.”

He returned to the UK where he re-trained in law after an 18-year break. His book, A Martime History of Rye, reflected his later career as a partner in a firm of solicitors in the town. He died in 2002.