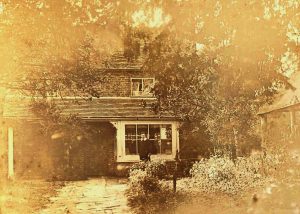 By June 1866 the School – which by then numbered 130 boys and six masters – had settled into a routine.  Rising every day in time for the first hour-long lesson at 7 am before breakfast at 8 am, long days of lessons were punctuated by twice-weekly exercise which consisted of runs for most and cricket for a few.  There was also the option of using the small gymnasium in what is now the Chapel corridor, the equipment having been donated by the Headmaster.

There were surprisingly few restrictions on what the boys did in the considerable amount of spare time they had.  Although the Village was out of bounds, almost anywhere else could be explored and locals recalled the boys’ increasingly familiar blue caps could be spotted all around the area on Sundays, with Winterfold and Pitch Hill favourite destinations.  Small shops and houses selling beer, lemonade and sweets dotted the area, and those on Smithwood Common were so popular that they too eventually had to be declared out of bounds.

From April, cricket had been played on the Common and rudimentary nets were erected at the bottom of the South Field.   Coaching was supervised by William Brayshaw, a 22-year-old Cambridge graduate who had joined at Easter.  The first match played by the School took place on June 8 when a scratch side raised by Albert Napper, the Village and School doctor, was beaten by ten wickets.  Three days later came the first-ever inter-school game when the School were beaten by an innings by a second-string side from Hurstpierpoint.   The School side was young, with the oldest player being 16 and the youngest 12.  The average age was barely 14.

An event of more importance to the wider community came in early June with the opening of the first Tuck Shop. A local lady, Mrs Ede, was recruited to run it and a premises opened on Horseshoe Lane in what is now Mason’s Cottage.  Mrs Ede kept half the profit, while the other half went to the School Games Fund which was administered by a committee consisting of the Headmaster, another master, a prefect and a non-prefect picked by the School.  The arrangement whereby the tuck shop funded general games continued until after World War One.

The first external examination (of progress more than of individuals) also took place in June when Henry Roby, the secretary to the Commission of Middle-Class Education, visited to examine the higher forms. His report was considered promising.