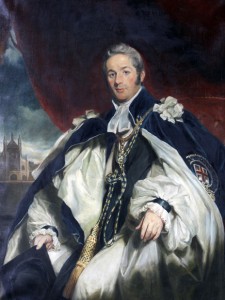 By March 1866 the hundred or so boys and four masters of the Surrey County School had settled into their daily routine.  The only breaks came with impromptu games of football on the South Field on Wednesday and Saturday afternoons, although there were no organised matches as such. On Sundays, between morning and evening chapel services (held in what became the Q1 and Q2 classrooms, now the admissions offices on the south side of the Quad) boys were left to their own devices, although they were encouraged to explore the surrounding countryside.  Under Joseph Merriman, there was not the rigid discipline and detailed management of the boys’ time usually associated with Victorian public schools.

On Friday, March 23 the Bishop of Winchester (left) came to stay in the Village, and on the following day he confirmed 17 boys at St Nicholas’ church.He also took the opportunity to inspect the School, with the Sussex Agricultural Express reporting:

“He saw over the dormitories, the hall and the temporary chapel, heard the boys sing in the school room and inquired for those whose parents were known to him. The lively interest he takes in the School was shown by his questions on the dietary and discipline, and by several practical suggestions.”

There was a brief five-day break for Easter at the end of the month, although it was not officially a holiday and all but the most local boys remained at the School.  While there were chapel services, the boys were allowed to roam freely during the recess.