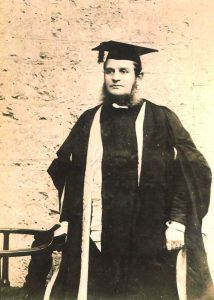 In May the fledgling school made the national press for the wrong reasons when a boy drowned on Whit Monday, at the time a public holiday.  Fourteen-year-old Charles Arthur Garrood, who had entered the School in January, went swimming in a small pond and although a competent swimmer, got into trouble in deep water. His body was not recovered until drags had been used for more than an hour.

On May 23, only two days after the accident, the coroner for West Surrey held an inquest at the School where it transpired that Garrood and another boy had asked the Headmaster for permission to bathe but Merriman refused, explaining he had to inspect the place first.

Garrood and four other boys then went for a walk and coming across a pond, Garrood stripped off and went in, but almost immediately disappeared.  Another boy, Harrison Goodall, went in to try to help but he too got into difficulties and had to climb out, explaining there was a “quicksand in the pool”. The boys then ran back to the School for assistance.

Merriman gave evidence and said that “neither boy evinced the slightest inclination to act in opposition to my decision”.  He admitted that there were no bounds for the boys, although there was a strict rule that they could not trespass.

The coroner returned a verdict of accidental death “accompanied by an expression that no blame whatever was attached to the authorities of the School”.

Later in the month, when the weather warmed up, swimming began in the still-operating Way and Arun Canal under the supervision of a Mr Caesar of Guildford. “Numbers were small,” noted the Surrey County School Register, “but with so good a swimming master, next summer will, no doubt, greatly increase it.”