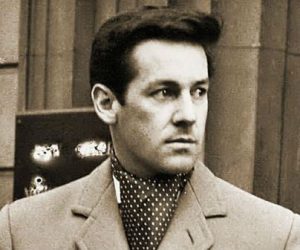 Politely described in various obituaries as a “gentleman adventurer” and “rogue”, he was in reality a conman and thief who set up the first Ann Summers shop in London in 1970

Few Cranleighans have become as notorious as Michael ‘Dandy Kim’ Caborn Waterfield. Politely described in various obituaries as a “gentleman adventurer” and “rogue”, he actually possessed few redeeming features although he had an ability to charm which he put to good use. In a chequered life he had a relationship with Diana Dors, smuggled guns into Cuba, served time in a French jail for theft and set up the first Ann Summers sex shop.

“He was not known to conform to the high ethical standards that most people take for granted, and indeed had several brushes with the law during his life,” The Times said. “Throughout it, he inspired love from many beautiful — preferably rich — women, some of whom were considerably younger than him. He divested them of their clothes and sometimes their fortunes. He was a chancer and often the chances paid off, at least at first.” The BBC noted that “he moved in high society and carried on some pretty low deals”.
His obituaries all claimed, as he did, that he ran away from Cranleigh at the age of 16 to become a jockey. The truth was less romantic; he was actually expelled by David Loveday for theft from another pupil. Loveday described him as “a sinister and untrustworthy child”.

His racing aspirations came to nothing and he was soon in London peddling black-market goods and trying to get into acting. By the late 1940s he had three cars and a flat in St John’s Wood. On New Year’s Eve 1948 he met 17-year-old Rank starlet Diana Dors at the Cross Keys pub in Chelsea. “I glanced away from my friends to see a boy with the most disturbing eyes that seemed to pierce right through me,” she recalled in her 1981 autobiography. “His dark good looks were almost beautiful… I half-smiled in his direction, but abruptly he turned away as if he hadn’t seen me.” As he had expected, his lack of interest intrigued her and they became lovers.

The relationship lasted two years, though they remained friends, and she went on to marry Dennis Hamilton, a door-to-door salesman with whom Waterfield became involved in a fracas at the Embassy Club in 1955, resulting in his first conviction for “insulting behaviour”. By then he was at the hub of a smart Chelsea set, throwing parties attended by the likes of Lord Lucan, his good looks and natty dress sense (a friend recalled his collection of 25 handmade suits) earning him the nickname “Dandy Kim”.

A succession of women fell under his spell. In his memoir Serendipity… a Life (2012), Peter Watson-Wood recalled how after seducing one such unfortunate – the daughter of an American millionaire – Waterfield had swept her off to Gretna Green for a quick marriage: “The American tycoon had to part with very considerable money in order to rescue his beloved daughter from this unsuitable union. Kim did the decent thing and, with the bank seriously topped up, he told the girl it wouldn’t work out after all and she should go back to daddy.”

In the late 1960s he opened the first Ann Summers sex shop near Marble Arch, naming the enterprise after Annice Summers, a former girlfriend who was working as manager of his Dorset estate. He felt that his own name and notoriety might be bad for business and Summers fronted the enterprise. His life was not short of adventures thereafter. A friend recalled that Waterfield was a “restless spirit”. Indeed he was.