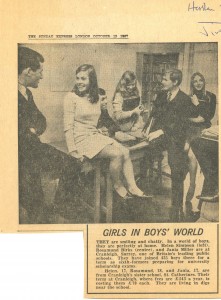 The first girl to appear at Cranleigh arrived in 1964, as part of a fledgling scheme to bring Cranleigh and its sister school, St Catherine’s, closer. At the time St Catherine’s was losing significant numbers of VIth formers to newly opened sixth-form colleges and the school’s science teaching was seen as a problem. To help with this, girls were brought to Cranleigh for specific lessons.  For a time a more formal sharing of facilities was discussed, which would have meant Cranleigh boys having some lessons at St Catherine’s, but this was considered too disruptive.  In 1967 The Daily Express carried a story about the early girls. “It was confusing for them being surrounded by hundreds of sex-starved boys,” said Patrick Harpur (West 1967), pictured sitting on the desk. “But they managed OK, I’d say.”