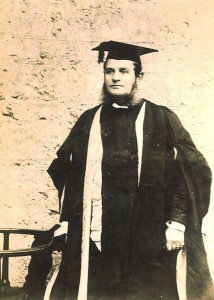 The School, full to bursting, was a cold and dark place heading into the winter. The original buildings had not been added to, so the Quad was only complete on the south and east sides with the north only one story high and the west open. What is now the library and Reading Room were the upper and middle-school classrooms, doubling up as a dining hall and chapel as necessary.

Lighting was by oil lamps which gave off poor light and no end of fumes. There was heating but that was set against the requirement that all dormitory windows had to be left open all night.

Football was played on what is now the East Lawn to the right of the drive when looking at the School. The lower part of the field flooded, in which case cross-country runs over Smithwood Common were the main exercise. In the early days boys did not have separate sports clothes and so ran in football boots and their day clothes.

At a small meeting of the council in the Village in early November, Dr Merriman reported that the school was full and he “resolved that the boys be admitted in order of application and that in future all boys not coming from the county of Surrey be charged an extra sum and that this be three guineas (equal to 10% of the annual fees) be payable in three instalments during the first year”. The council deferred until they could consult all members but this was clearly approved as within a week the local newspapers were reporting the non-Surrey levy.