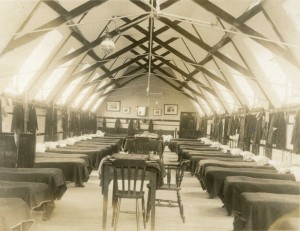 The slowly growing group of boys settled into a daily routine which had them get up at 6.30am and have a lesson before breakfast. There was a considerable amount of free time and they were encouraged to explore the local countryside, although the Village itself was strictly out of bounds. With the only lighting coming from oil lamps and candles, the evenings were gloomy, boys working or reading at desks from the light of a single candle.

The railway finally opened on October 2, connecting the village with Guildford and Horsham and providing an easy link to London. “Free travel was granted for everyone on the first day, so it is quite surprising that Baynards station had receipts of between £2 and £3. Most of the trains were full and the stations were crowded, except for Rudgwick, which did not open until the following month, due to the gradient alterations taking place.”

A party of dignitaries, headed by the Bishop of Winchester, arrived in Cranleigh on October 11 and were entertained by John Bradshaw of Knowle, one of the Council and at the time the High Sherriff of Surrey. The following morning a special service was held at St Nicholas’ church in the Village where the bishop preached on the subject of middle-class education. A collection at the end raised the remarkable sum of £85 13s 10d. From there the party headed to the School where another service was held in what was described as “the temporary chapel” and that was followed by lunch in what is now the Williams Library. A number of speeches were made and the dignatories then made their way down to the station to catch the train. The Register said “numbers both at the church and the luncheon were large, greater indeed than anyone had anticipated”.

Officially, registrations surged after the opening but the register suggests that was not the case, and it was not until the end of the year that things really picked up.