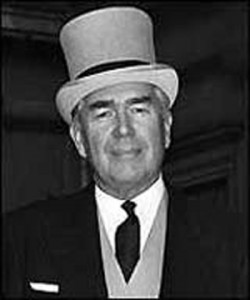 Ernest William Swanton, though known for being a cricket writer and commentator under his initials, E. W. Swanton, was never called anything but Jim. From his early days at Cranleigh he adored sports and particularly cricket, a passion that was sealed during a visit to the Oval as a boy in 1919, to watch Surrey play Yorkshire.

He went on to be useful batsman at club level, and in three prewar matches, for Middlesex against Oxford and Cambridge universities, he scored 67 runs at an average of 13.40. In 1935 he founded the wandering club known as The Arabs, and made several tours with them.

As a reporter of both cricket and rugby he worked for regional publications and the Evening Standard and broadcast running commentary for the BBC as early as 1934. But when war broke out he immediately joined the army. An acting major in the Bedfordshire Yeomanry, he was captured at Singapore and became, for three years, a Japanese prisoner of war. Though worked in hospital amenities rather than building railways he did not escape hardship; his interview with the Imperial War Museum records that he caught dengue fever, which he described as ‘rather tiresome’ and also polio which impacted his health in later life. In the camps he was popular for arranging various entertainments, including broadcasts of cricket features, and his autobiography notes that: “In the Thai jungle my 1939 Wisden was in such demand that at one camp borrowers had to be limited to 12 hours each.”

When Swanton returned from war service, he took up running commentary again, going on to work for BBC Radio for 30 years, where his deep and fruity voice became synonymous with cricket to generations of listeners. He was a source of great authority on the game and between 1946 and 1975 he also worked as a journalist and columnist for The Daily Telegraph, a period in which he became the leading commentator on the sport.