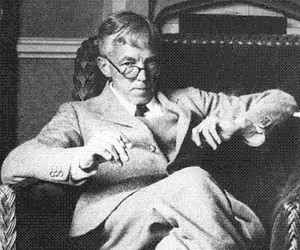 GH Hardy was born in Cranleigh where his father was the School’s first bursar and the first man to run House, which eventually became the junior school. A prodigious talent, by the age of two he was writing down numbers up to a million and factorising the hymn numbers on the Chapel board. When he entered Cranleigh, aged 10, he was played in form III with boys five years his senior. Within two years he was placed first in the Upper Sixth. In 1890 he was identified by an external examiner as producing “exceptional papers for a boy of his age” and it was clear that he had outgrown the teaching capacity of the School. That year he won a scholarship to Winchester and even there within a year he was being taught in a class of one.

Hardy never tired of what he saw as the beauty of mathematics. Throughout his career, he developed theories and analysed his subject in a fresh and new way, changing the way the world looked at British mathematicians , who were known as dwellers in applied mathematics before his time. His many essays, the most famous of which is A Mathematician’s Apology, also brought changes in lay understanding of mathematics.

He undertook many celebrated collaborations with J. E. Littlewood, exploring aesthetic developments in mathematical analysis and analytic number theory. He is also known for being the mentor of the great Indian mathematician , Srinivasa Ramanujan, a poor , self-taught cleark in whom Hardy immediately recognized genius. He arranged for Ramanujan to be brought to Cambridge in 1914, filled in the gaps in his mathematical education by private tutoring, and coauthored several papers with him before Ramanujan returned to India in 1919, the same year that Hardy was appointed to the Savilian Chair of Geometry at the University of Oxford. He remained there until his two year exchange to Princeton and returned to Cambridge in 1931, as Sadleirian Professor of Pure Mathematics, where he remained until his death. In his lifetime Hardy was widely honoured for his work, being elected a fellow of the Royal Society (1910) and twice elected president of the London Mathematical Society (1926–28, 1939–41). His work continues to be viewed as contributing highly to mathematics today.