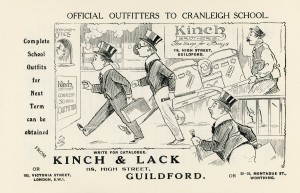 An advertisement dating from 1928 for the official suppliers of clothing to the School.  Although the School Shop had opened in 1919 it mainly supplied sports equipment, stationery and small items such as shirt studs and shoelaces.  Parents were expected to obtain the core uniform elsewhere.  Kinch and Lack remain in business and are the country’s largest independent retailer of school uniforms.