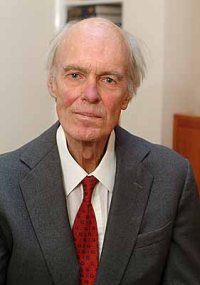 He was perhaps best known for his chairmanship of two committees, on the press (1993) and privacy (1990).

David Calcutt was a music scholar at Cranleigh before winning a choral scholarship to King’s College, Cambridge where he took two degrees simultaneously – music and law.  He was called to the bar in 1955, becoming a formidable lawyer where he specialised in commercial cases, taking silk in 1972.

He was perhaps best known for his chairmanship of two committees, on the press (1993) and privacy (1990).  His report on press self-regulation led to the introduction of strict laws to protect privacy, despite fierce opposition from the press which led to him being singled out for personal attacks.

In 1961, on the recommendation of David Loveday, he became one of the youngest members of the Cranleigh governors, serving for more than three decades, latterly as chairman. He was also Master of Magdalene, Cambridge and chairman of the Bar Council, among many other posts.  He was knighted in 1991 and died in 2004 aged 73.