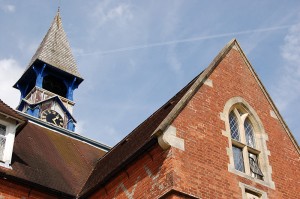 The clock tower was built in 1870 but the clock itself was not installed until 1874 presented by Cuthbert Peek, brother of Sir Henry Peek who had funded the Chapel. The clock cost £82 and the three bells, which came from a foundry in Whitechapel, £29. But it was a constant theme in letters to The Cranleighan which regularly complained that it kept poor time and often the four faces were out of synch with each other and the bells failed to sound. In 1925 a poem was printed in its honour:

Thou double Janus, who with faces four,
Four contradictory times dost show,
Who, starting slow,
As the week passes gainest more and more,
Leaving the Village lagging far behind.

The clock was also the subject of pranks which included tying the minute and hour hands together. During World War Two the tower was used by the Home Guard, initially for fire watching and to look for enemy planes (the air raid sirens for School and Village were controlled by a switch in the tower) and subsequently to scan the skies for V1 rockets. Until 1995, when the system was changed to being electric, the clock had to be wound manually, necessitating a weekly trip up to the tower by a member of the bursarial staff. The bells sounded day and night until the 1990s when they were silenced at night.