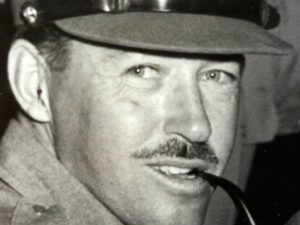 The son of a vicar, Tony Fowle’s five years at Cranleigh were uneventful although he was an officer in the OTC and a house captain by the time he left in the summer of 1940. After a six-month course at the Benmore Forestry School, Argyll, he joined the Home Defence Unit and did his basic military training in York, Scotland and Catterick. In 1941 he was commissioned into the RA and posted to guard the Kent coast. The following year, he embarked for Durban and was in charge of the two guns in the stern of the vessel. He subsequently joined the 2nd Regiment Royal Horse Artillery (2 RHA) in the Western Desert. After the regiment had taken heavy losses, he was attached to the 2nd Indian Field Regiment as intelligence officer. It was part of the Persia and Iraq Force and, for the next two years, his service with PAI Force included spells in Egypt, Syria, Jordan and the Lebanon. In late 1944, he was posted to India. He commanded mountain batteries at Landi Kotal (now in Pakistan), Deolali and Kohat, Waziristan. After passing the Staff College exam, in 1948 he returned to Pakistan as the chief instructor in gunnery.

At first light on January 3 1951 Fowle was in Korea serving with 45 FR. The Daily Telegraph reported: “He was manning a forward observation post with the Royal Ulster Rifles when two Chinese Divisions attacked on a brigade front strung out across four miles of mountainous terrain. His regiment fired all day, putting down thousands of shells, but the enemy hordes still came on singing and shouting. When allied forces to the left and right suddenly pulled out, leaving 45 FR with unprotected flanks, they were ordered to withdraw. It was a pitch-black night and freezing cold. The narrow mountain track was choked with vehicles and 3,000 Chinese armed with rifles and mortars were blocking the way. Fowle’s vehicle was hit and tumbled over the side and into a ravine. Fires were raging everywhere and enemy snipers used the light to pick off their targets. Fowle said afterwards that it was hell. Two hundred men were lost and he was astonished to come out of it alive.

“In April his troop was supporting the Belgian Battalion who had been by cut off ahead of the front line. In the early evening they were attacked by 10,000 Chinese. Fowle’s troop was firing at the massed hordes over open sights and managed to hold on throughout the night and the next day. When it became obvious that all would be lost if they did not pull out, they made a dash for it across country. The Belgians swam across the Imjin River, escaped into the mountains and got clear. Fowle’s men could not do the same without allowing their guns and vehicles to fall into the hands of the enemy, so they charged across the single pontoon bridge, which was already surrounded by Chinese. The bridge came under withering machine-gun fire, but all the guns and vehicles except one got through and not a single man was lost. After a hectic 12-mile drive across open fields in the dark, they found their way back to their own lines. Three days and nights of continual action followed. Every morning, the battery found itself surrounded and was forced to fight its way out of a trap. The ferocity of the battle – in which tank commanders sprayed their own units with machine-gun fire to clear them of swarms of enemy that were clambering over them, and infantry, dug into underground bunkers and in danger of being overrun, called down artillery fire on their own positions – caught the imagination of the world.”

Fowle was awarded an MC for the six months from January to June 1951. The citation stated that he had shown the greatest gallantry and was always in the forefront of any action.

After his service in Korea, he returned to Britain and filled a succession of staff appointments. He retired from the Army in 1971. After a further five years serving as an RA Retired Officer, he joined Hunting Engineering, where he became head of product development. He had a strong sense of duty and played an active role with the British Korean Veterans, the Bedfordshire Conservative Association and the church. He took expeditions to Iceland, Newfoundland and Lapland with the British Schools Exploring Society. He was also secretary of the Royal Central Asian Society and travelled extensively with them.

He died in September 2016. In 1958 he married Evelyn Impey, whom he met while sailing as a crew on her father’s yacht. She predeceased him and he is survived by their two sons and two daughters.