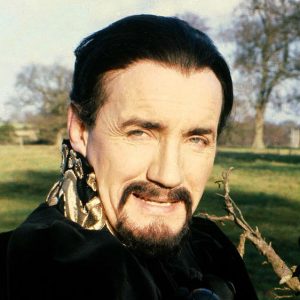 Tony Holmes was an outstanding sportsman at School and then for the OC Rugby Club, but decided to follow his father and grandfather into acting; he had already appeared in a film before coming to Cranleigh.

After studying at RADA and using the stage name Anthony Ainley, he appeared regularly on TV as well as in films, where his swarthy looks invariably saw him cast as a villain, but he is probably best remembered for his role as The Master in Dr Who which he played from 1981 to 1989.  He was a keen cricketer, often turning down roles if they clashed with his sport.  He often batted in what looked like flying goggles, to protect his eyes for screen close-ups, and regularly ate his sandwiches alone in his car, explaining he hated cheese, a staple of cricket teas.