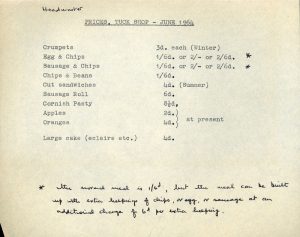 The first Tuck Shop was opened in what is now Mason’s Cottage on Horseshoe Lane in June 1866 and, with a one-term gap in 1975, there has been one at the School ever since.

Gatley’s, the current site, is the sixth location. In 1960 the old Colds swimming baths were covered over and the area, which is now the Merriman Music Centre, converted into a modern tuck shop which provided meals and well as sweets and other food.