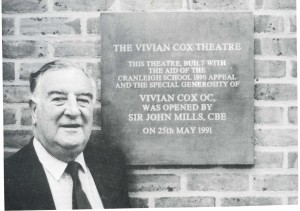 Viv Cox was an exceptional all-rounder; his was a truly remarkable life. From 1946 to 1967 he worked as a successful film producer, mixing with most of the stars of the period.

Viv Cox was an exceptional all-rounder, missing out on a rugby Blue for Cambridge because of a knee injury; he switched to hockey and secured his Blue, as well as four England caps, in that sport. His was a truly remarkable life. In the Royal Navy, he got to know Churchill and set up a map room for Roosevelt in the White House; while in Washington, he met Walt Disney in a bar. He entertained King George VI on HMS Duke of York in 1942, and after time in Normandy he was on hand to witness the Japanese surrender in 1945. From 1946 to 1967 he worked as a successful film producer, mixing with most of the stars of the period – his namedropping was legendary. He was also one of the early pioneers of TV cooking, producing a series where he motored round France in his MGB.

From 1967 to 1975 he taught at Cranleigh, and on retiring returned to the world of acting to run the Mermaid Theatre. From 1982 he retired, for good, to Cranleigh, living in a house on the Lowers that he built, and which he later donated to the School. He also generously backed the Vivian Cox Theatre in 1991 and was an active supporter of all things Old Cranleighan.  In 2001, aged, 85, he accompanied the OC Cricket Club on an often gruelling tour of Kenya. When he died in 2009, aged 93, his ashes were scattered on the South Field.